THE GAME OF WAR 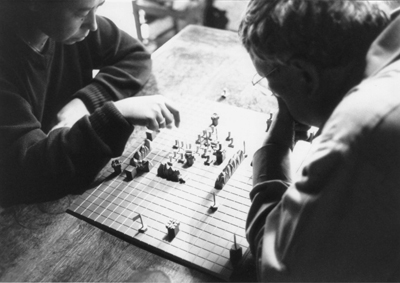 Wargames are a continuation of politics by other means.

Guy Debord is celebrated as the chief strategist of the Situationist International and as the author of the searing critique of the media-saturated society of consumer capitalism: The Society of the Spectacle. What is much less well known is that after the May '68 Revolution, Debord and his partner - Alice Becker-Ho - quit Paris and went to live in a remote French village. Over the next two decades, Debord devoted much of the rest of his life to inventing, refining and promoting what he came to regard as his most important project: The Game of War. For Debord, The Game of War wasn't just a game - it was a guide to how people should live their lives within Fordist society. By playing, revolutionary activists could learn how to fight and win against the oppressors of spectacular society. The Game of War is a Clausewitz simulator: a Napoleonic-era military strategy game where armies must maintain their communications structure to survive - and where victory is achieved by smashing your opponent's supply network rather than by taking their pieces. "... I have studied the logic of war. Moreover, I succeeded, a long time ago, in presenting the basics of its movements on a rather simple board game: the forces in contention and the contradictory necessities imposed on the operations of each of the two parties. I have played this game and, in the often difficult conduct of my life, I have utilised lessons from it - I have also set myself rules of the game for this life, and I have followed them. The surprises of this Kriegsspiel seem inexhaustible; and I fear that this may be the only one of my works that anyone will dare to acknowledge as having some value. On the question of whether I have made good use of such lessons, I will leave to others to decide." Guy Debord, Panegyric. For a full breakdown of the board and pieces of The Game of War click on the three images below:

The Game of War Resources