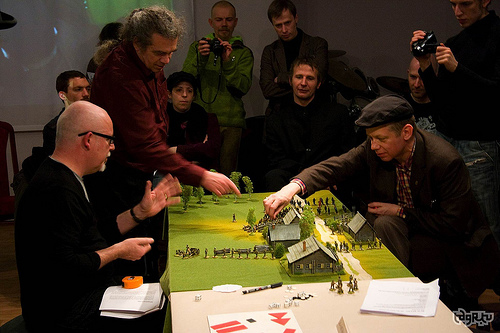 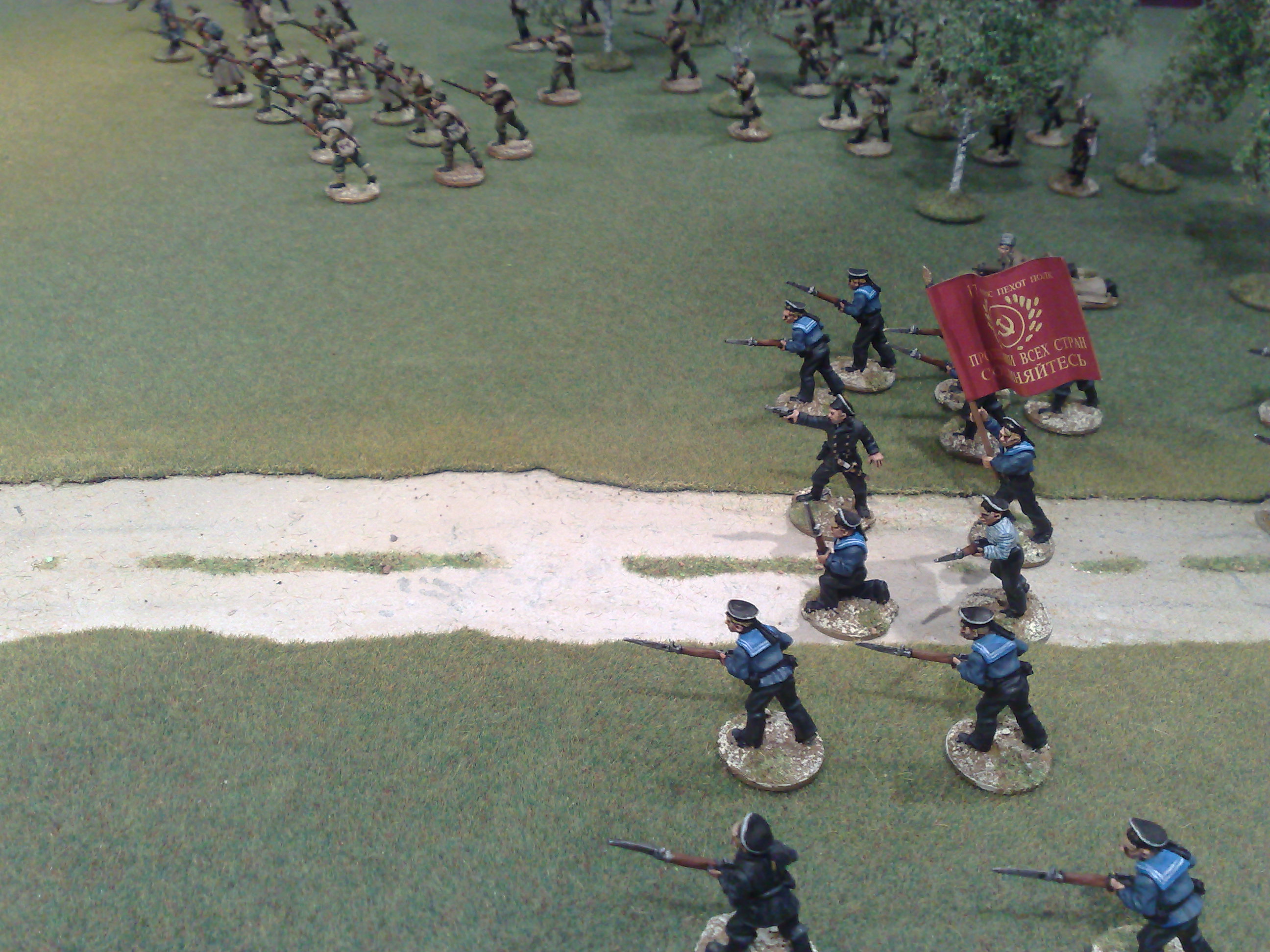 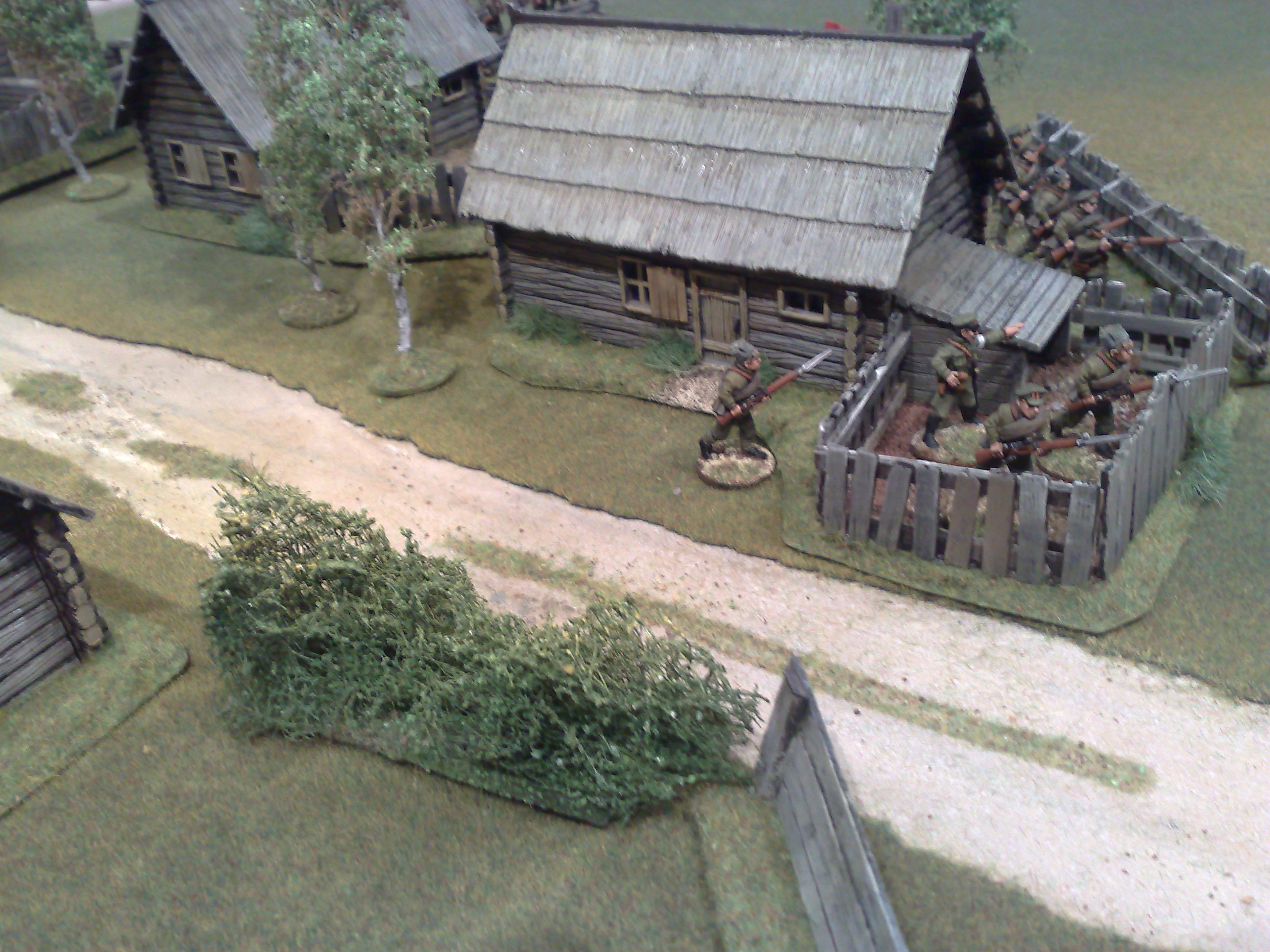 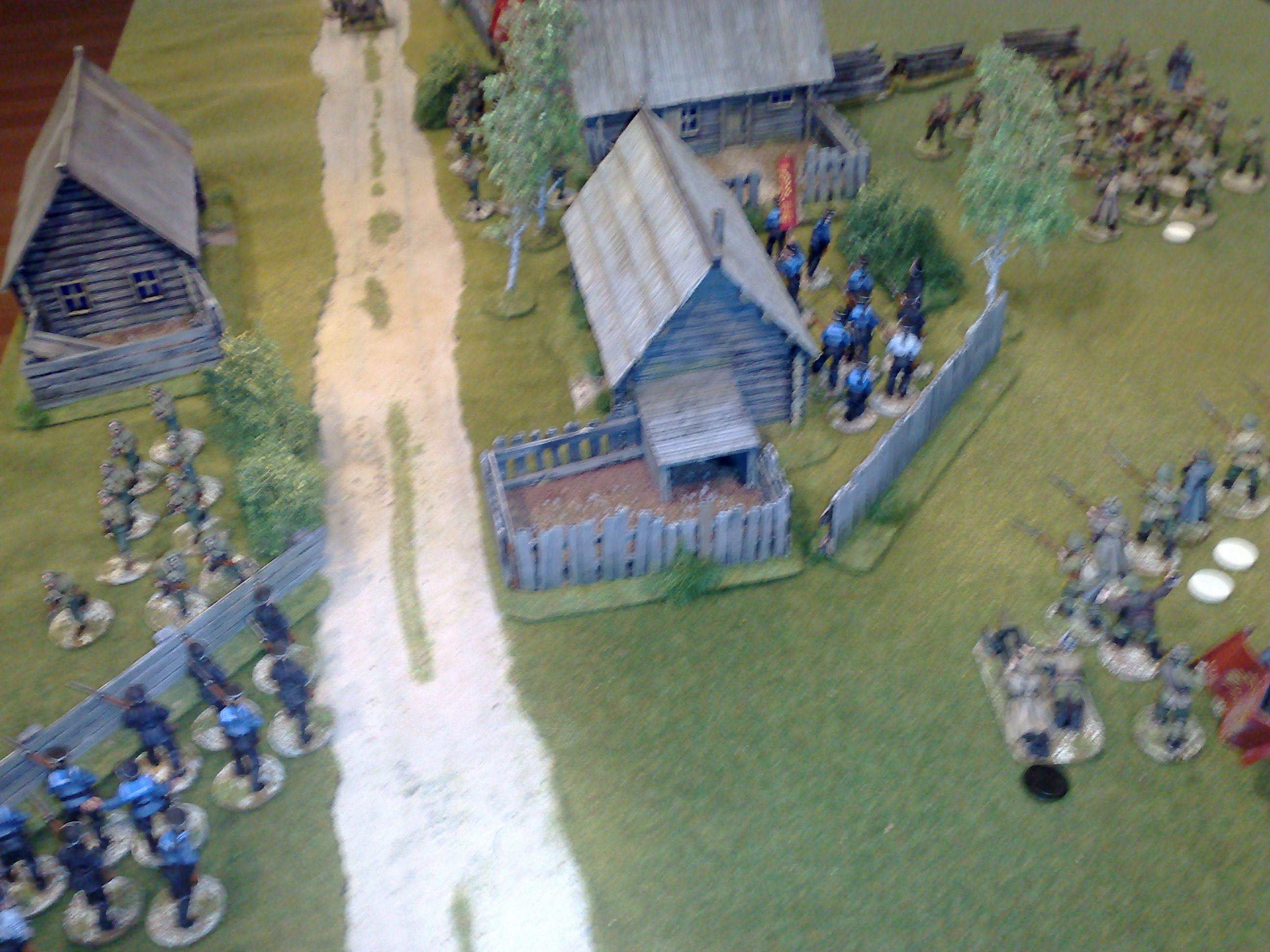 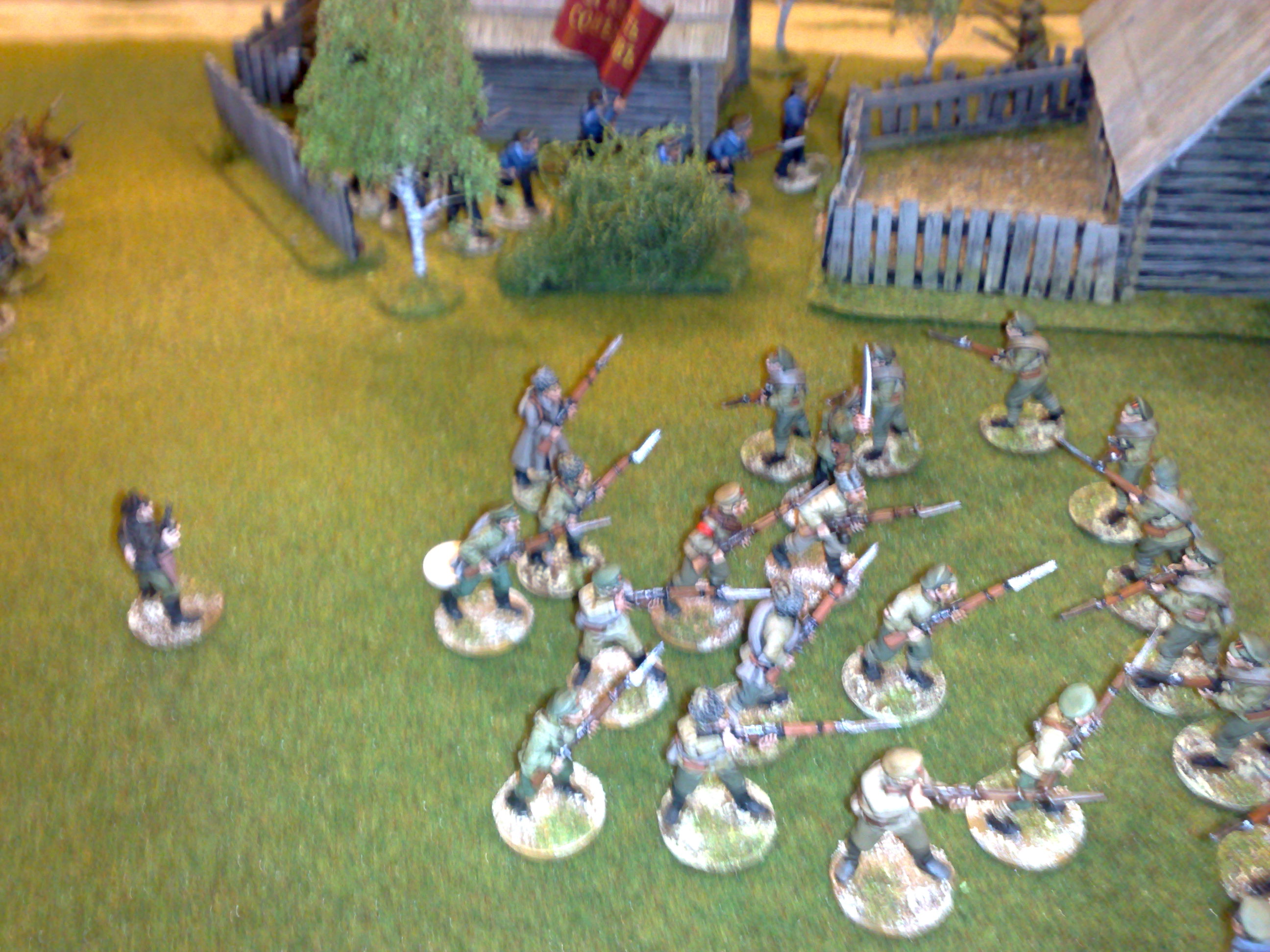 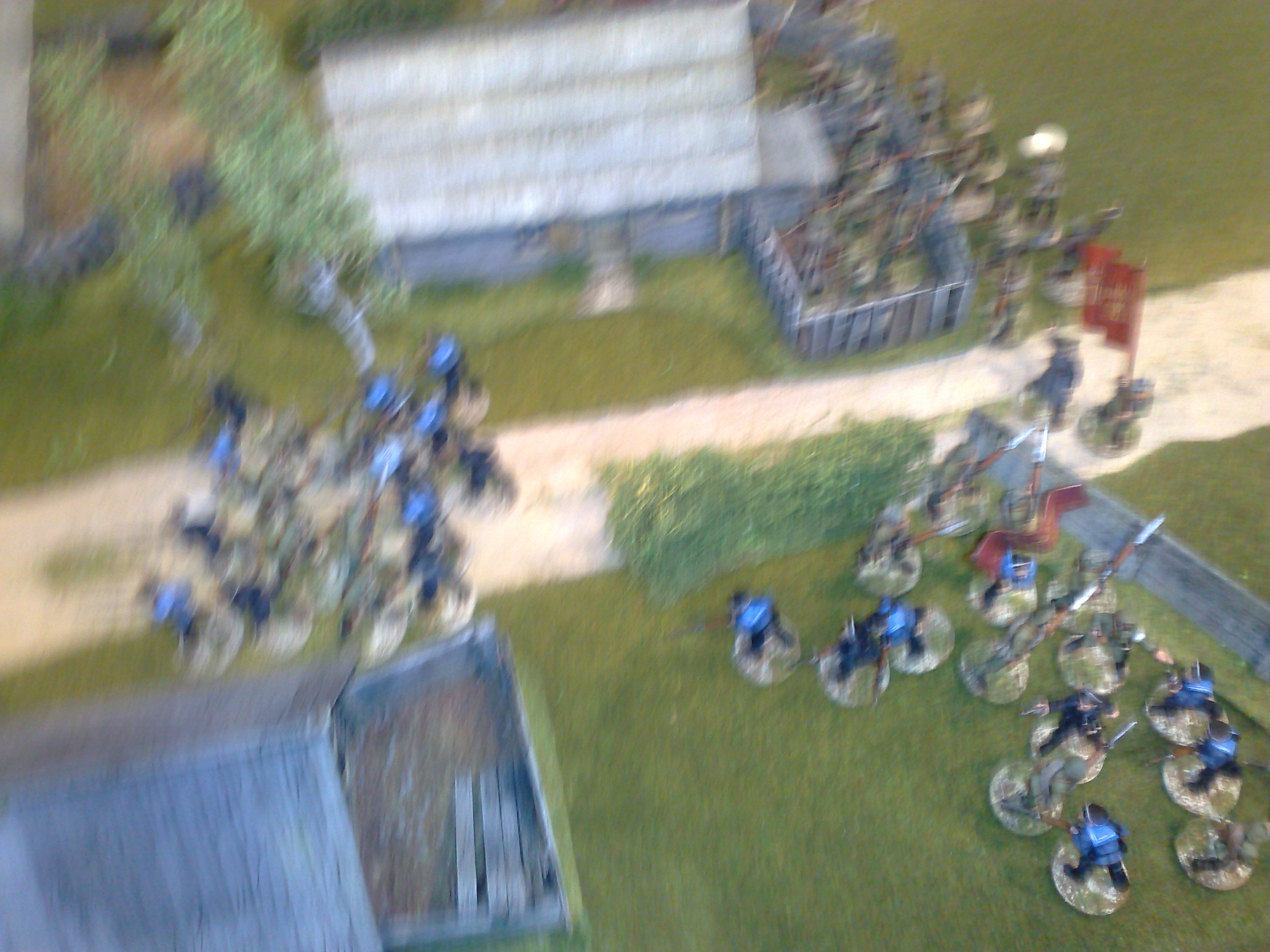 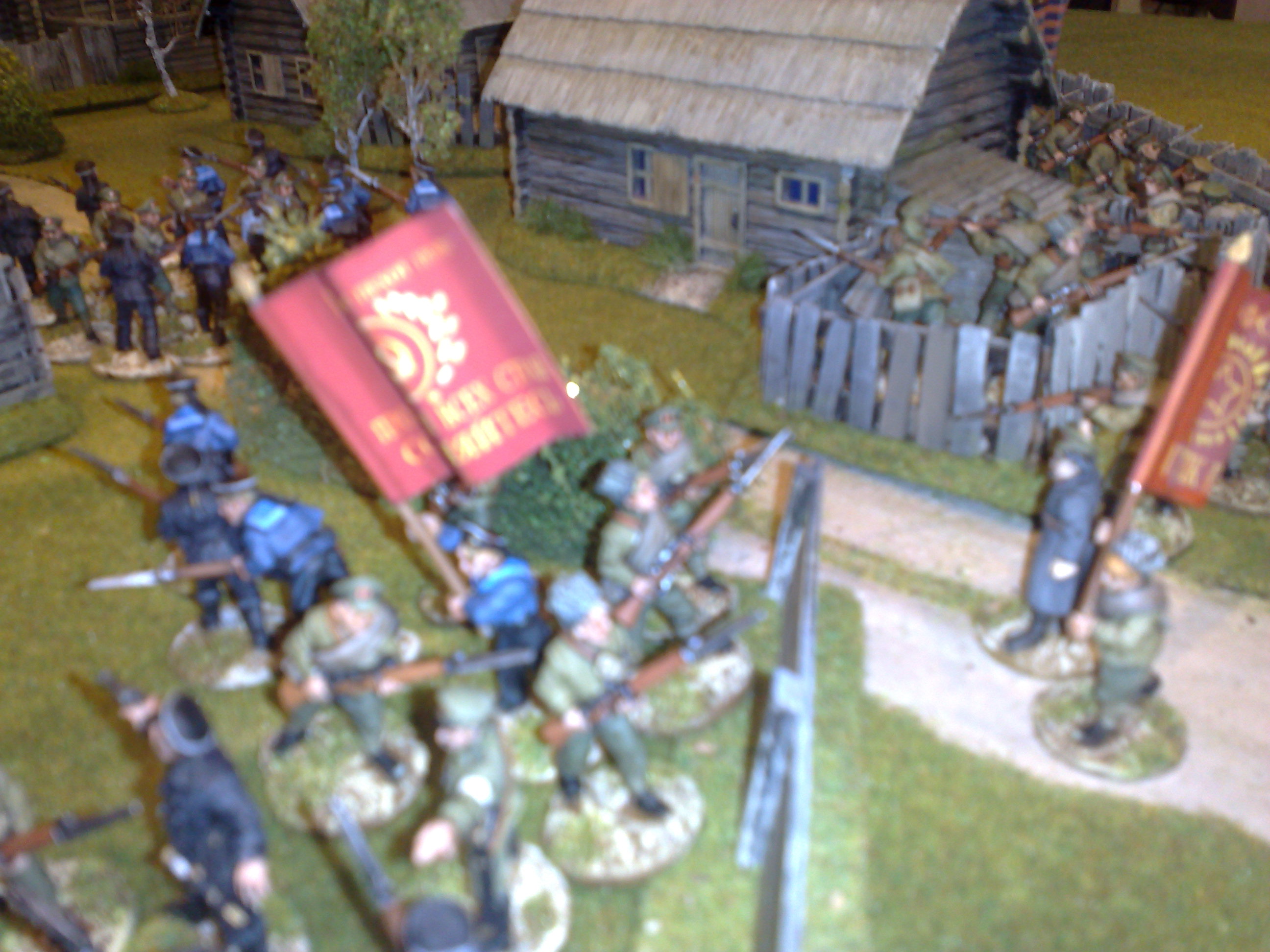 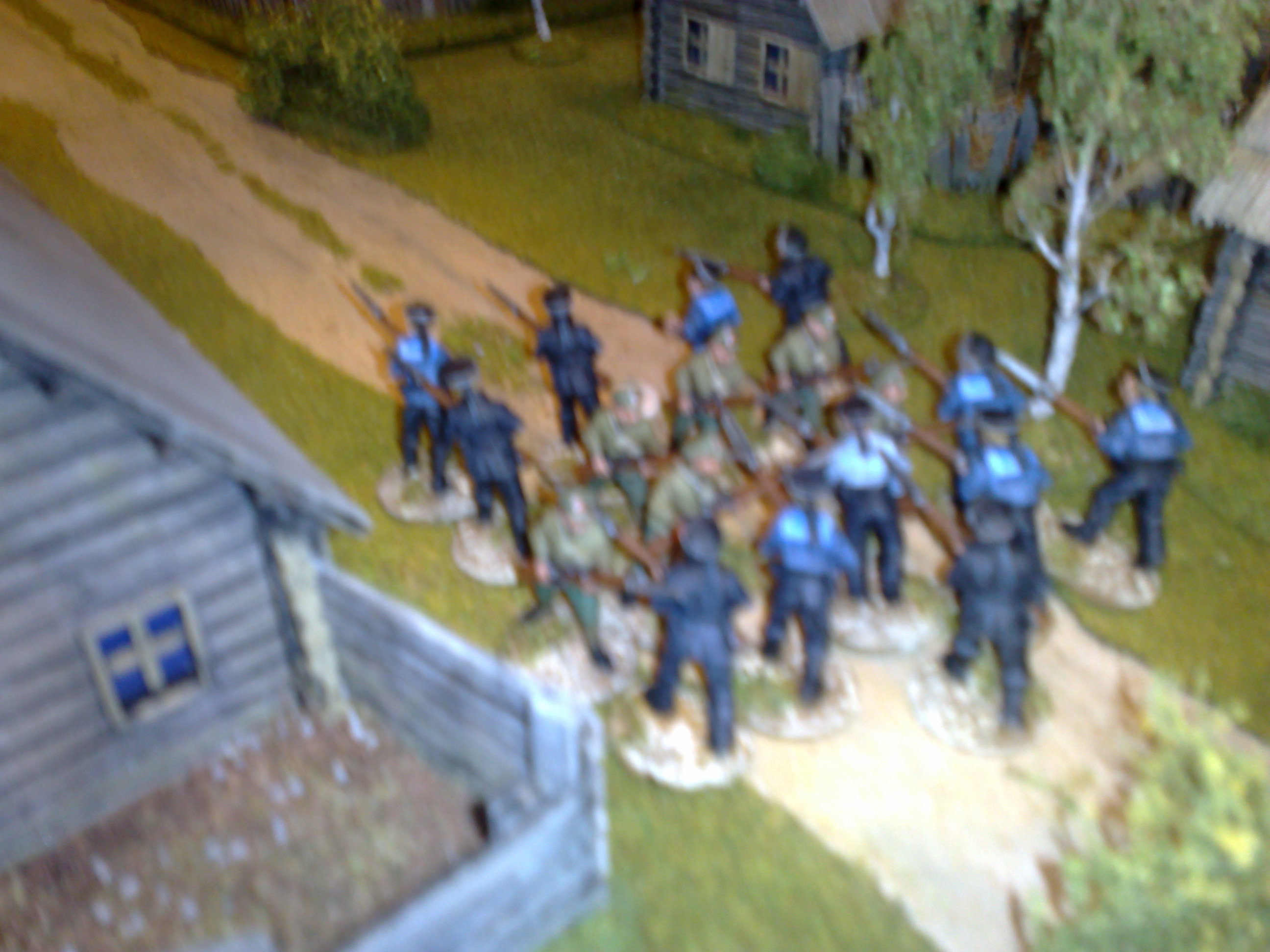 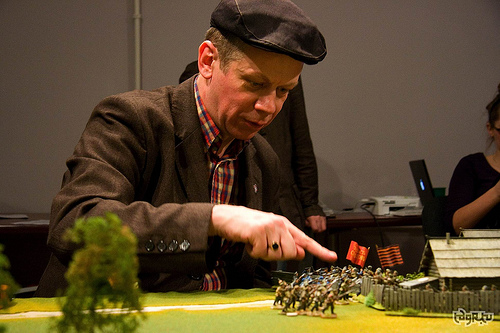 The Battle of Kazan

"With the snow falling outside, we prepared our two toy soldier armies for their tabletop battle at the Winter Palace. Mark would command the Social Democratic forces of the Constituent Assembly who were defending a village which blocked the road to Kazan in the Tatarstan region of Russia. Most of his team's troops were peasant militia of doubtful quality, but they were backed up by a contingent of hardened veterans from the Czechoslovak Legion. I would take charge of the Bolshevik fighters for Soviet rule whose mission was to take this village on the Volga. Our army not only had more and better soldiers in its ranks, but also included an elite regiment of Kronstadt sailors. Best of all, my role as commander-in-chief would be represented by a 28mm model of the Bolsheviks' most charismatic leader: Leon Trotsky. Having placed the figurines on the terrain in the opening positions shown, everything was now ready for Class Wargames' initial contribution to Cyberfest 2008. As soon as the audience arrived and settled down, the Reds versus Reds game commenced. Having the first move, my band of Bolsheviks decided to launch an attack on the village with the large group of regular troops on our right flank. In response, Mark's Social Democratic forces opened up with rifles, machine guns and artillery to check our advance, but their firepower fortunately proved to be ineffective. Within a couple of moves, our right flank forces were engaged in fierce hand-to-hand fighting with the defenders of the village. In this combat, we had the advantage of not only pitting tough regulars against raw recruits, but also having two Bolshevik commissars standing behind them who would shoot anyone who might be tempted to run away from the fray. While Mark and his comrades were preoccupied with preventing the disintegration of their left flank, my side next sent our shock troops of Kronstadt sailors into the centre of the village to confront the Czechoslovak Legion while our remaining regulars moved forward in support to distract the Social Democrats' right flank. Then, as the game was reaching its deciding moment, Mark’s conscripts in the north of the village broke and ran after suffering heavy casualties in their melee with our regular troops. Facing the combined might of the whole Bolshevik army, the Czechoslovak Legion was soon also forced to withdraw. Realising that their position was now hopeless, Mark's team gracefully accepted defeat in this game of Reds versus Reds. As in September 1918, the Soviet forces had once again achieved their objective. Having taken this village on the Volga river, they could now advance unopposed to the gates of Kazan. Above all, the Bolsheviks had secured their monopoly control over the Red side in the Russian Civil War." - Richard Barbrook, Class Wargames: ludic subversion against spectacular capitalism.